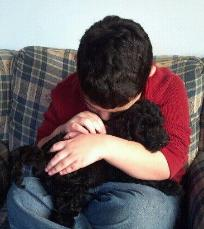 I have an amazing story to tell about our goldendoodle, Mario, who our family adopted from Doodle Dandy GoldenDoodles…. We’ve had Mario since he was  8 weeks old. For  the past week, Mario has been waking me up multiple times throughout the night by standing by face and whining until I wake up. I’ve been trying  everything to figure out why he’s been doing this. I was worried something was wrong with him andI, frankly, was exhausted from being woken up so
much. I just couldn’t figure it out because everything was normal with Mario except for this one thing. I was at my wits end and as it seemed to be more like a behavioral issue than a health issue for Mario I contacted our breeder, Linda, to see if she could help me figure out what was happening…. Linda asked “Is he sensing a change in somebody’s breathing like a… service dog would do?” {(he has no service dog training} Bells  went off in my head because I have sleep apnea, which Linda did not know, and I don’t use my CPAP machine. Also, I was the only person in the house Mario was trying to wake up and once I was up he settled down and went about his business as usual….until I was asleep again and within an hour he was waking me up… last night I used the CPAP machine. And guess what? Mario did not wake me once!.. Our beloved dog was trying to save my life!!  I must have stopped breathing several times throughout the night and he was waking me to get me to breathe again. Incredible! What an AMAZING animal….I just can’t explain the feeling of immense gratitude and love I have for him…Lea
Ferriera
REFERENCE:  lafr68@gmail.com

PLEASE VISIT OUR FACEBOOK PAGE FOR MANY MANY, MORE PHOTOS AND REFERRALS.